When he and his cousins arrived at The Hive, home of Barnet FC, for an open trial all those years ago, a young Daniel Oyegoke could never have expected to have been in the position in which he finds himself today.

By his own admission, Daniel was not one of the most talented players to arrive at Barnet, a club suspended between League 2 and the depths of Non-League football. While he always retained a belief in his own abilities, it was a breakthrough season at U14 level that not only convinced his family but other academies that there was some serious talent to be worked with. The prospect of a move to Arsenal needed no convincing at all. Everything since has happened rather fast.

‘The first time I went to Arsenal was for a match,’ remembers Daniel. ‘No training, straight in for a game against Charlton. That was my first involvement. I didn’t sleep, I was bare nervous. My mum made sure I was in the right frame of mind and told me to be fearless, as if I was playing for Barnet or school.’ 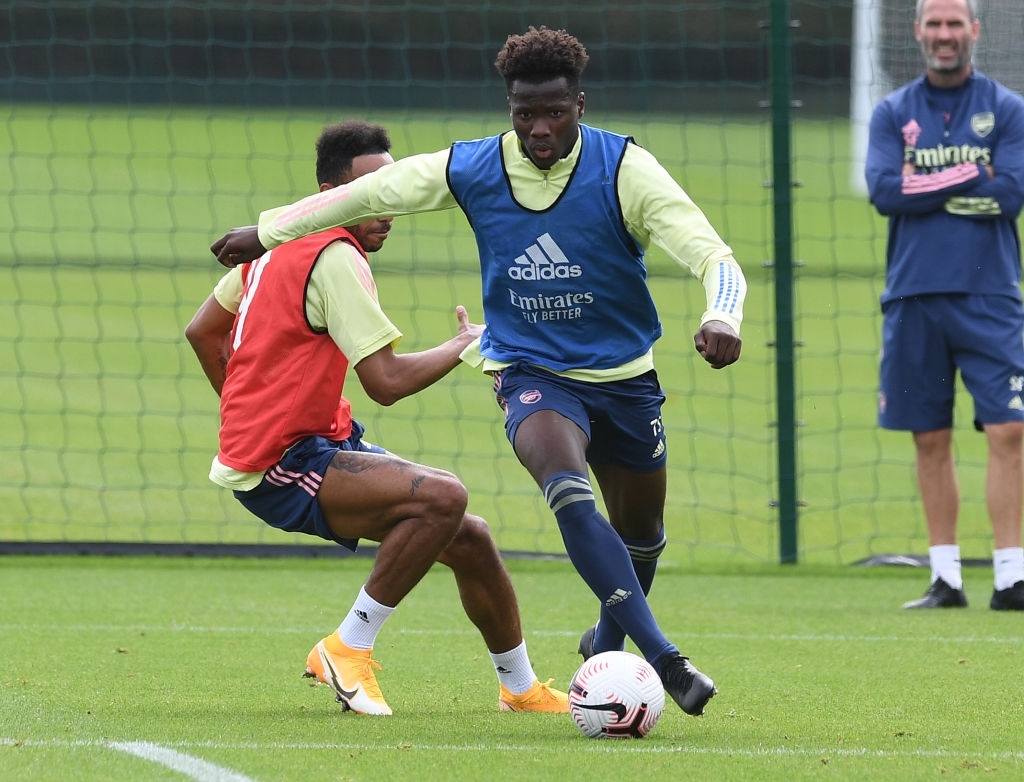 Just the two goals for a striker playing right wing-back in his first 60 minutes of football at Hale End.

‘They continued playing me there, and I was enjoying it. I just wanted to play and was starting in an Arsenal side having come from Barnet. In my first season at U15s, I started playing up as well. It all came so quick.’

So quick that nothing could surprise Daniel anymore. Very few things, at least.

‘Per Mertesacker became academy manager at the beginning of my U16 season. He and Marcel Lucassen just sat me down and said that for my development, being a full-back was the way forward.’

That came as a shock.

‘I played right wing-back quite a lot when I signed and I think a lot of top clubs do that with their players, converting them from attackers into defenders. They said that the way full-backs operate now would suit me.’

‘Obviously, at that age, you want to be the glory man, scoring the goals,’ says Daniel. ‘You’re with your mates and they’re like ‘What’s going on?’ For me, changing positions was a mental battle. When it came, I wasn’t over the moon about it, but I saw it as a new challenge. I’m quite a competitive person so it was just about getting my mind around it and learning a new position. I spoke to my mum again and she was just saying that they obviously know more than any of us, and that Per Mertesacker knows what he’s doing.’ 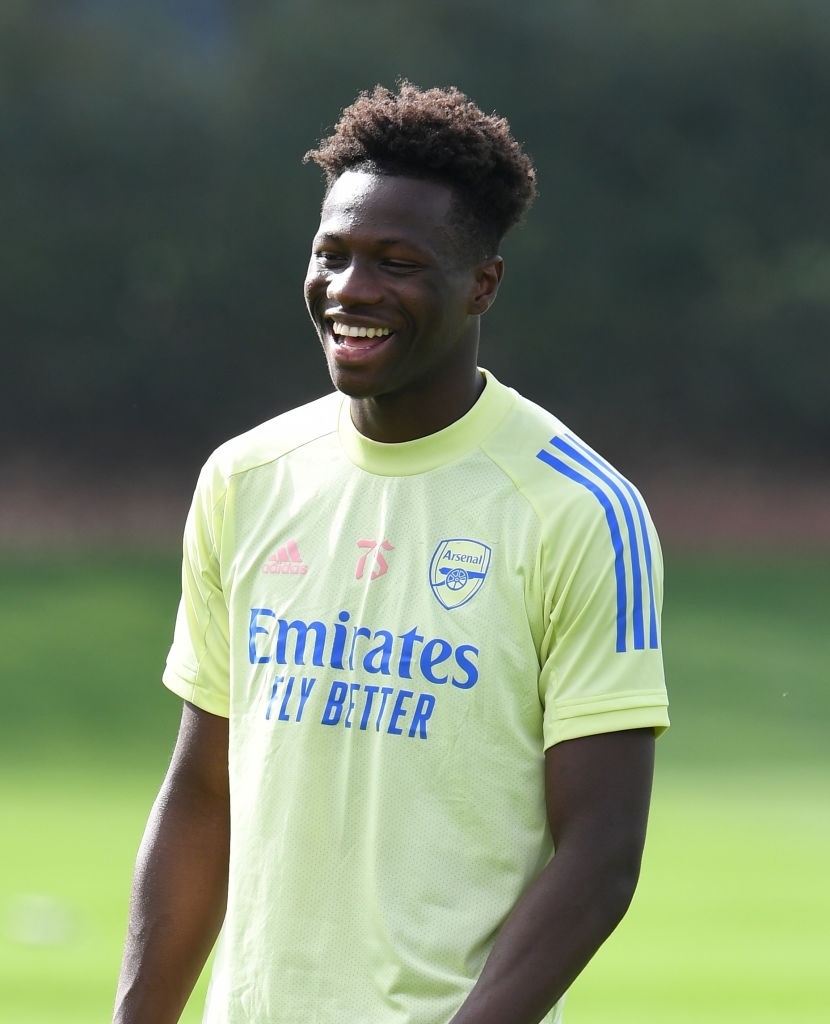 It took just over two months of playing right-back before England decided to hand Daniel his first international call up in February 2019. Per Mertesacker sure knows what he’s doing. There was another man who was equally important to the development of the 17-year-old, although he was based somewhat further afield, about two hundred miles away, establishing himself in the blue of Manchester.

‘Once you change positions, you watch football differently. I was trying to look at what Kyle Walker was doing. This is when all these new right-backs were coming out of nowhere. He used to play like he wasn’t a defender. He was an attacking right-back, and I was an attacker about to play there. I wanted to watch a full-back that was going to attack as much as possible. During the transition, he helped me a lot.’

Although the U18 Premier League points table may suggest otherwise, last season was an extremely valuable experience. Arsenal U18s had to defend, and defend a lot. Daniel, a dynamic force going forward, was learning on the job. The timing of forward runs, dealing with overloads down his right-hand side. Even the art of the throw-in.

‘I also used to go out before and after training, and just get one of the midfielders so that I could throw the ball to them. I would do it a countless number of times every day. Ken Gillard, our U18s coach, highlighted the importance of it as a set piece. He would teach me about where to throw it, how fast to throw it, how high to throw it. If my throw-in goes to someone’s chest, Ken will go livid. He wants me to arrow it, on the full, straight onto their feet. Those are the little one percents that people forget about.’

‘At the end of my u16s season I dislocated my shoulder away with England. I was out till the end of September. I missed pre-season and I was playing catch-up when I got back, and I only got going just before Christmas. Because [of the injury], I was trying to throw the ball and I couldn’t get any power.

‘Before the coronavirus, it was the longest time I spent doing nothing. My family was all around me. I couldn’t train so I’d see my friends often. I turned a negative into a positive. Even though I was in a sling, that summer with my GCSEs was probably the best time of my life off the field.’

As for experiences on it, a maiden call-up to the first-team for a recent friendly against MK Dons must come close to topping the list.

‘Even the manager saying your name, it’s mad because you don’t expect them to know who you are. I was the last one to come on and got around 5 or 10 minutes. I was so happy. I just wanted to get a touch of the ball. It went so quick and I was so grateful.’ 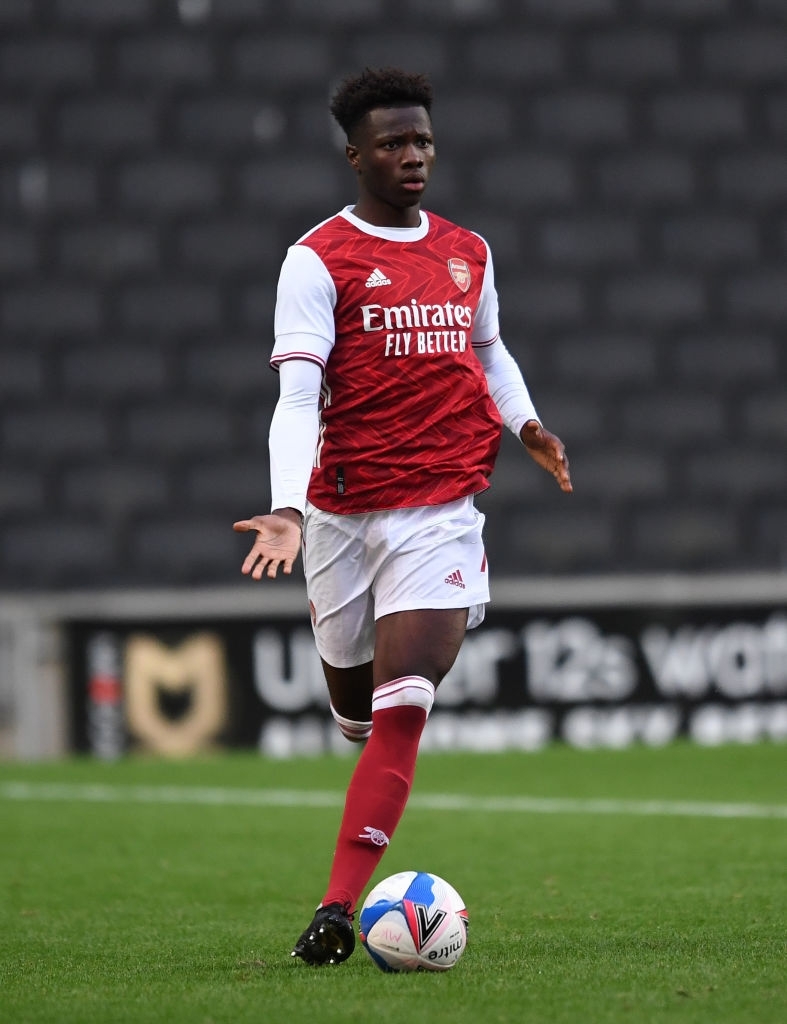 The academy departures of Zak Swanson, Jordi Osei-Tutu and Matthew Dennis have hopefully paved the way for some more of the same. A starting berth at right-back awaits Daniel upon a competitive return to academy duties in September for what would be his first major taste of U23 football, and one wouldn’t bet against a Europa league appearance in the coming months.

‘The club has made their intentions clear to me. I’ve just got to go and get it. They’ve stuck by me, developed me, looked after me and my family. I love the club and there’s no place I’d rather be. I feel like I’ve got to show that, whether it’s on the pitch for the U23s, or making a competitive debut for the first team.’

A fully firing Daniel Oyegoke will take some stopping this season. His defensive game is maturing by the day and going forward, not many wingers can keep up. But in a quite poetic way, nor can Daniel. 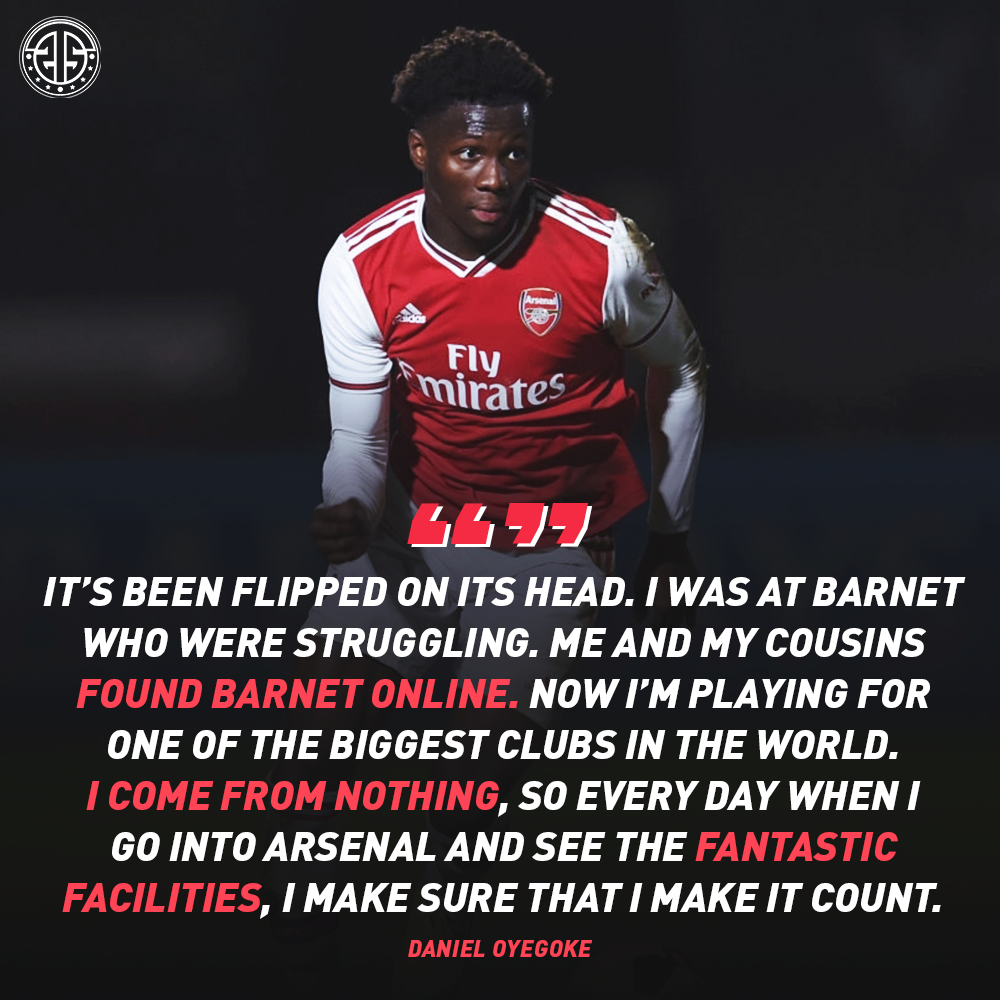 ‘It’s been flipped on its head. I was at Barnet who were struggling. Me and my cousins found Barnet online. Now I’m playing for one of the biggest clubs in the world. I’m grateful for the opportunities I’ve had and have just got to keep taking them. I don’t take it for granted. I come from nothing, so every day when I go into Arsenal and see the fantastic facilities, I make sure that I make it count.’

‘This is the most important stage in my life, in terms of what I want to do with my career and my development. I have just got to make sure that I keep enjoying my football. If I do the business on the pitch, anything can happen.’