TSS sat down for a chat with Man City and England U19 goalkeeper James Trafford, currently on loan in League 1 at Accrington Stanley. 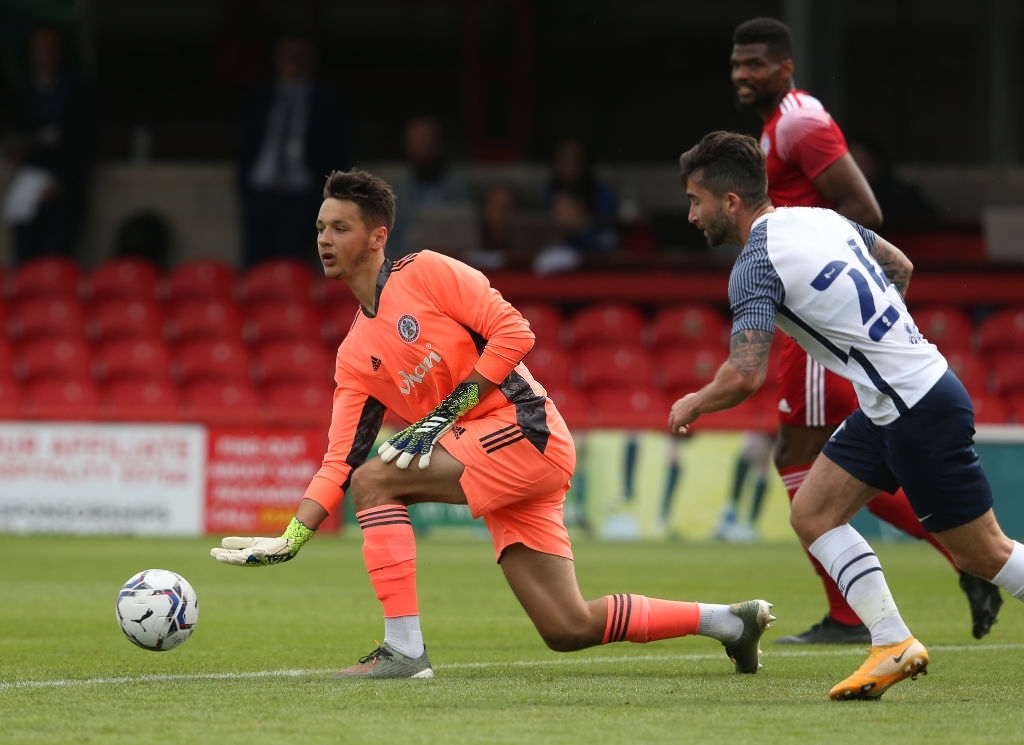 TSS: Congratulations on your loan move to Accrington Stanley! What have the first few days been like?

JT: Accrington is really good. We’re signing loads of players, there have been lots of games and lots of running. Good vibes at Accrington.

I was confident that I was always going to get League 1 this summer with the progress I made last year. When I heard of interest from Accrington, I said yes as quickly as I could. It was the club that I was most willing to go to because there are a lot of hard-working lads there and it’s closer to home. It‘s just the perfect place to go and develop.

TSS: A League 1 loan for a goalkeeper your age is pretty good going, no?

JT: Everyone peaks and develops at different times. I wouldn’t really read too much into going to League 1 at 18, because there’s not one set path for anyone in football. Nick Pope was a college lad at this age, and he could’ve been our number one at the Euros. But you look at [Dean] Henderson who was playing [in League 2 at Grimsby Town] when he was 18.

Obviously, everyone wants to play as many games as they can but I’m not thinking too much about it. I just think about the training. The goalkeeper coach at City told me months ago just to take every day as it comes, and if you do that, without thinking weeks and months ahead, you’ll end up a lot better as a person and a player, but ideally, I’ll play a lot!

TSS: Talk to me about the origins of your passion for goalkeeping!

JT: I never wanted to be a goalkeeper, always just a midfielder because I was bare fit so I used to run up the pitch all the time. My older cousins played football, and they always threw me in goal because I was the youngest of the whole family. My dad actually thought I was quite good! I was never good enough outfield so I got put in goal. It was one of them!

TSS: With your education at City now, would you back yourself to play outfield in a 23s game?

JT: I think I could probably play as a CB. I’d pocket guys. At City, I’d be able to take [Liam] Delap. I’m a good defender, I get stuck in and I don’t think he’d be used to it. I’d be like a Sean Dyche player, tackles and headers, Brexit style. 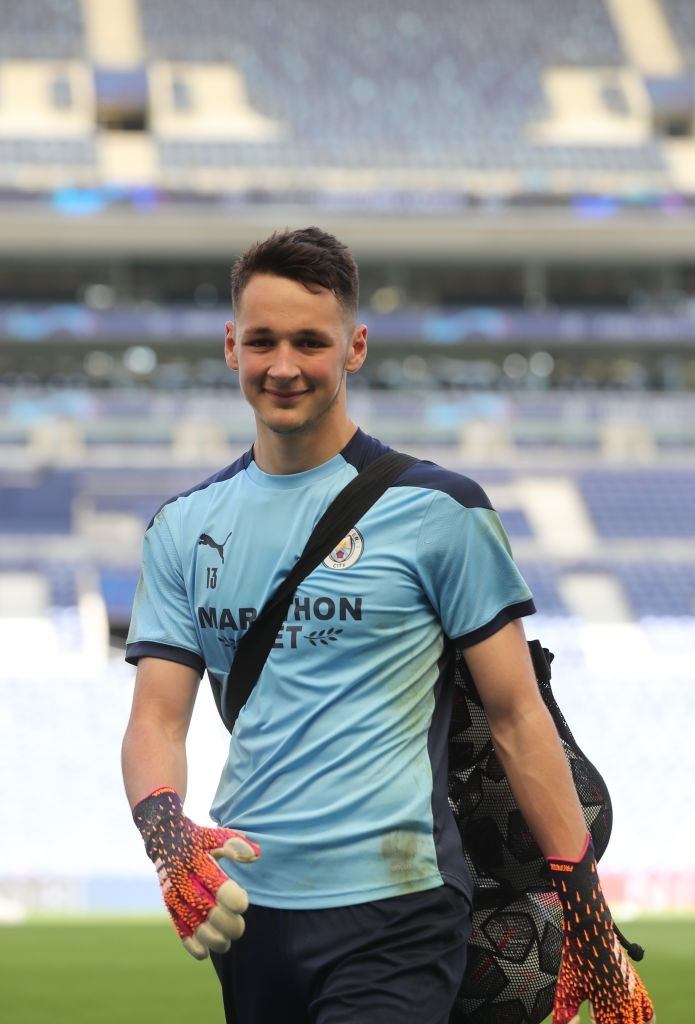 PORTO, PORTUGAL – MAY 28: Manchester City’s James Trafford in action during a training session ahead of the UEFA Champions League Final between Manchester City FC and Chelsea FC at Estadio do Dragao on May 28, 2021 in Porto, Portugal. (Photo by Victoria Haydn/Manchester City FC via Getty Images)

TSS: When did you first join an academy and when did City come in for you?

JT: I was at Carlisle from U9s. They signed most players that were on trial, but there were 6 of us left who were basically all going to get released. One Tuesday night session, they said they needed another goalie. My dad always used to bring goalie gloves to training, and I said that I would go in goal. I ran to my mum, who gave me my gloves and I was actually quite good and kept training in goal.

They were about to sign me, but I’d come down once a month to City at U12s just to get used to it. It wasn’t really deep at the time and I treated it like I was just going out to play football.

TSS: Since joining, you’ve played across the age groups, so what was that first experience like getting called up for the first team?

JT: The first time I got called up was after we played a Checkatrade game in the evening. I got told that I was going to have to travel with the first team the next day, who had Burnley away in the Carabao Cup. In the morning, I woke up well early, because there was no chance I was going to be late. I was quite lucky because Cole [Palmer], Tommy [Doyle], and Liam [Delap] were all in the first team. Everyone was really welcoming and made an effort. Fernandinho spoke to me about the game and I got on well with Zack [Steffen] on the first day.

TSS: I remember first-team commitments prevented you from starting in the FA Youth Cup final against Chelsea, which the team went on to win 3-2! How were the emotions then?

JT: I was mad, there was head loss! Nah, it is what it is, and at the end of the day, everyone’s at City to help the first-team. I got the medal, [Cieran] Slicker played and I am not bothered now. 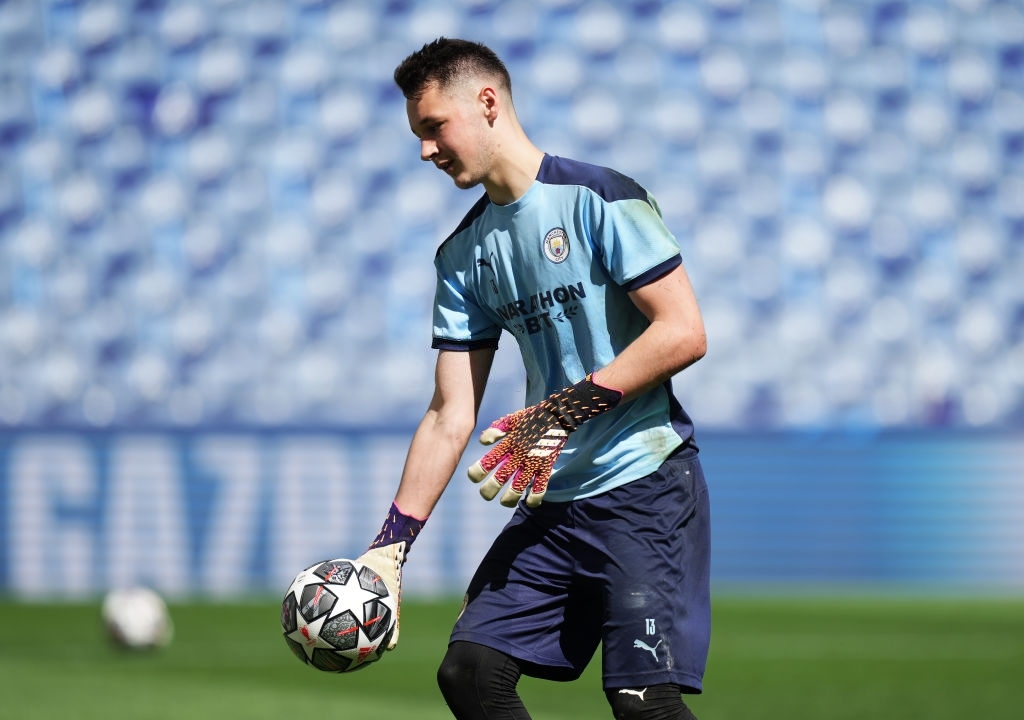 PORTO, PORTUGAL – MAY 28: James Trafford of Manchester City in action during a training session at Estadio do Dragao on May 28, 2021 in Porto, Portugal. (Photo by Matt McNulty – Manchester City/Manchester City FC via Getty Images)

TSS: The 18s, 23s, and first-team all enjoyed domestic success last season. How come you don’t stop winning and a few more words on Liam and Cole?

JT: I don’t even know. We just do bare passing, we do bare shooting, bare on the ball. We’re just quite good on the ball and tire the other teams out.

Liam bangs it well hard. He’s got a bit of accuracy as well. He’s not even a hit and hope, so it’s difficult when we do a finishing drill. Thankfully, I’ve never played against him. Outfield, I would take him, but I don’t know about in goal!

[As for Cole], he’s come on a lot because he’s always been smaller than everyone else, but he knew that he was going to grow and fill out. Now he’s older and bigger, he can get shoulder to shoulder with people and doesn’t get pushed off the ball, and he’s doing really well.

TSS: Talking of silverware, when you flew out with the first team to Porto for the Champions League final, at what stage did you think about getting your hands on a medal?

JT: I didn’t think about getting the medal! I never played so I thought that there was no need for me to get a medal. I’ll hopefully win it one day, so I’ll get it then!

TSS: What do you make of British punditry when it comes to analysing goalkeepers?

JT: The outfield players try to say what a goalkeeper should have done yet it’s always the complete opposite. It doesn’t make me angry but it just annoys me. When they get stick for making a mistake, obviously I sympathise with them but not too much because every goalkeeper signs up for the job. It’s like signing up to be a postman and not liking delivering the letters!

TSS: Put us on some up-and-coming English goalkeepers we need to know about.

JT: We’ll start off young. Logan Carson, hard goalie, big baller from my way! True Grant, U16, another big baller! I don’t really see many young goalies now though, but I heard the lad at Palace is also decent, Joe Whitworth.

JT: I’m going Brexit. I’ll be a rush goalie. My centre-back partner, Joe Palmer, you won’t know him, but I played 5-aside over the summer with him. Tackles! Surface area! He’s going above the shin and the guy squashes you into the fence. Joe White [of Newcastle], who I played with at Carlisle, supports the locals. We need a bit of pedigree in the team! We might not win, but the team has got passion. James Mcattee. He’s got tek but he is a passion merchant, and up top, I’m going Delap. We’ve got two passion merchants at the back, two passion merchants up top who get you through the tough times, and Joe White is just vibes in midfield.

Appreciate your time James, and thank you to those reading! Make sure you follow the socials if you haven’t already! You can find us @thesecretscout1 on Instagram, @TheSecretScout_ on Twitter, and THESECRETSCOUT on YouTube! Stay tuned for some more content coming your way…